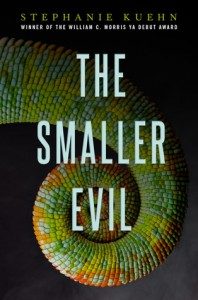 Arman is a self-loathing high school senior who’s been heavily medicated for as long as he can remember. So when a mysterious man named Beau invites him to leave his meth-head stepdad, find enlightenment, and live up to the potential no one else can see, Arman eagerly accepts. Beau’s compound, nestled in the mountains of California, is populated by an eclectic group of believers who speak in their own jargon and conduct Beau’s rituals with practiced devotion. But shortly after Arman’s arrival, Beau disappears and Arman is the only witness to what may have been Beau’s murder or suicide—he can’t seem to remember. The mystery of Beau’s disappearance and the inner workings of the self-help commune take a back seat to Kuehn’s sharp writing and the inner conflict of Arman, a complex and sympathetic character on a journey of self-discovery that ends up having little to do with Beau or his cult, and all to do with himself.

← The 5th Wave by Rick YanceyGo Ask Alice by Anonymous →