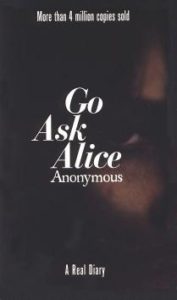 The unnamed, fifteen-year-old narrator of Go Ask Alice accidentally takes LSD that someone slipped into her drink at a party. For the next two years, we follow her very rapid descent into drug use, promiscuity, and sexual abuse. She has several failed attempts to clean up, but can’t seem to return to her “normal life.” The book is written like a diary, which adds a very chilling effect to the first-person account, but dated, 40-year-old jargon like groovy detracts from the potential timelessness of the story. Even if it isn’t “A Real Diary” as its cover claims, Go Ask Alice is a unique read that is sure to haunt parents of teenage girls and resonate with those struggling with addiction.