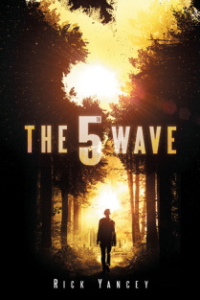 In the not-so-distant future, aliens unleash a series of catastrophes (waves) to Earth in order to ready it for occupation. During the 4th wave, Cassie Sullivan is separated from her brother. So as the fifth and final wave begins, she is desperately trying to reconnect with him when she meets the mysterious Even Walker, who isn’t what he seems. The Fifth Wave has lots of things potentially working against it: tired alien invasion premise, clichéd love triangle, and several alternating narrators that can be jarring with each new chapter. But these possible detractors vanish when you become instantly engrossed in Yancey’s high-speed plot and Cassie’s self-aware, sharp, and cynical narration. Plus, the twists keep the potential clichés feeling fresh. The story unfolds in flashbacks, dropping you in the middle of a dystopian Earth, challenging you to piece together what happened before the first page and most importantly, keeps you anxiously turning pages to find out what happens next.