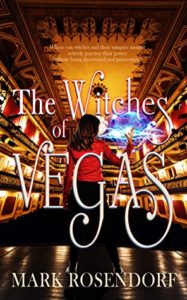 Isis is a fifteen-year-old adopted member of the Witches of Vegas, the most popular magic show on the Vegas Strip. Zack and his uncle run another magic show in town and struggle to compete with the awe-inspiring theatrics of the Witches, unaware their competition is an actual coven led by an immortal vampire patriarch. Desperate to save their show, Zack and his uncle befriend a reporter wanting to expose the Witches of Vegas as frauds, unknowingly delivering Isis and her clan into the hands of an ancient enemy. The first novel in Rosendorf’s Witches of Vegas series is a fast-paced romp around the Strip with two main characters who develop a refreshingly authentic friendship, surrounded by a cast of characters as endearing as they are fun. And while the story creates a fresh spin on witches and vampires set against the magical glitz of the Vegas Strip, at its core, the novel is a heartwarming story about acceptance and family.

← Ready Player One by Ernest Cline