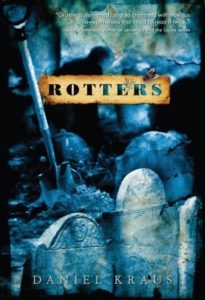 When a bus kills Joey’s mother, he is sent to Iowa to live with his father Ken, a man he’s never met. From the start, Ken is abusive, leaving Joey to fend for himself for days at a time. Joey finds no comfort in his new town where other students and a particularly merciless teacher unleash constant bullying. Desperate to belong, Joey follows Ken on one of his mysterious sabbaticals and discovers his estranged father is part of a secret network of grave robbers. Daniel Kraus’ story telling is darkly atmospheric with graphic descriptions of rotting corpses, physical decay, and self-mutilation, described from the point of view of a 16-year-old desperate to find a personal connection to something. Rotters is a story that is tragic, macabre, and riveting all at once. It is a story that will conjure vivid images that will linger long after the last page.

← The Ravenous by Amy LukavicsShade Me by Jennifer Brown →